Oh well a touch of grey kinda suits me anyway . . . 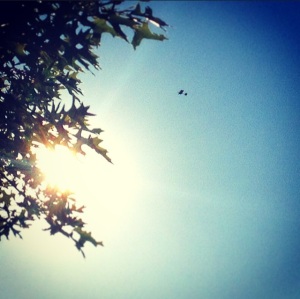 I pull into the parking lot at 6AM as I do a couple mornings a week. I meet my friend to exercise before work. Sometimes we jog, sometimes we walk, sometimes we lunge our way through the park. Okay, mostly we walk. We say our good mornings. We see the same people along the path. We can almost time our walk by where we see them. We know we’ve reached the home stretch around the time the one man says, “Enjoy the rest of your day.”

When the weather broke there were two new faces. Two elderly men. I stopped to watch them in the parking lot while waiting for my friend. One of them began to unpack his car slowly. Time had hunched his back – the peak of the hump was nearly level with his eyes. If I had to guess, I’d say in his mid-eighties. He wears a big brimmed baseball cap, the kind with the thin cord at the base of the bill. It reminded me of the baseball caps my grandfather used to wear when he was fishing.

He unloaded a box onto a cart that was both to carry his stuff and act as a walker. It took him about 15 minutes to go about 20 yards to his spot, a patch of pavement in the park facing the open field. His cart turned into a chair and he sat down to unload a remote control, then an airplane. His friend was already there. I doubt his friend was too much younger but he was of a slighter build and still had a bit of spring in his step. I wondered if the man sitting envied that spring. My friend arrived and on we walked.

Another morning they are there again. My friend and I are running late and the old man in the grandfather hat had already started the 20 yard trek to his spot. I watch him from my truck. He sits down and begins to unpack. It looks like a ritual. Slow, deliberate and methodical. I don’t know why this holds my attention. He is setting his airplane off into flight by the time we make it up to the start of the path. His friend was getting his helicopter out. I saw them suddenly as little boys. I could imagine them as kids with their first toy planes running around their yards making engine noises by flapping their lips. There was no less joy in my imagined scene than there was in the scene before me. Grandfather Hat did a flyby at old Springy’s head. Springy looks shocked then they both start to laugh. I smile.

I stood thoughtful for a moment. I snapped a picture and we started our walk. We talk as we walk, me still thinking about the two elderly men. We didn’t jog at all on this particular day. We only did a few lunges but my body felt stiff. Maybe it was the yoga or the push-ups from the night before? I wasn’t in pain or anything, just stiff. I’m getting older. Hey, that’s life.

I think of the old man sitting. And it hits me. I am completely struck with a compassion and a respect for this man. Just as I think to curse the limitations that come with age, I see him laughing. Yes, his body has (same as mine) reached its peak. The aches and pains, the stiffness, they probably are not going anywhere. But there he was. Yeah, set up took a little longer but the great show still goes on. There are planes to be flown!

I snap a picture of the tiny plane in flight to capture a memory of this lesson. I share the picture here. You’ll have to conjure your own image of Grandfather Hat. I kept that first picture of him for my own.  A reminder. My view on aging was near-sighted, focused on what I felt was drifting out of my reach into some blur ahead. Job opportunities, physical abilities, a natural hair color. If not for that little airplane, I may have stayed hoping somehow I could dig my heels into the space I occupy now and stop time. I could have kept fighting it, kept protesting for the anti-aging campaign. But right then I accepted it. I accepted all of it. Because yeah, that’s life! And I’ve got some flying to do.

Mother, Wife, Healer, Hopeful Suburban Homesteader. . . Words are my mind's tools; writing, my soul's craft; this circus of life, my heart's muse.
View all posts by the.way.i.bee →
This entry was posted in Live and Learn and tagged age Gracefully, aging, anti-aging, life, living. Bookmark the permalink.